Perhaps calling this soup Continental is a bit over zealous as I pretty much came up with it whilst   trying to clear some quality produce (read: vegetables that are about to turn) from the fridgie the other day. I am certain however that if this recipe were in the  Slenderella cookbook  circa 1956, it would have a similar moniker as everything in that weight loss bible is luxuriously named.

Digressing, this is a fabulous non dairy soup that features coconut milk and a hint of ginger (the spice, not Ron Weasley). It can be a crockpot soup or you can make it on the stove top. I'm sharing the crock pot version because I have an inappropriate crush on my crocker (and Ron Weasley, but lets keep that on the dl)!

Ingredients:
Frozen or fresh Chicken- I used six frozen chicken drumsticks, skin on, however feel free to use whatever chicken you have on hand. Adjust the amount to suit the number of people you' re feeding.

*Pre heat crocker on low setting.
*Dice all vegetables  into approximately 1/4 inch cubes and toss into the crocker.
*Add olive oil, salt and pepper to the veg and stir with a wooden spoon.
* Season and place chicken (it can be frozen) into the crocker.
*Shake and pour the can of coconut milk into the crockpot.
*Stir in the chicken stock
*Add the ginger and frozen corn and stir the entire thing a few times.
*Cover and slow cook on low for at least four hours.
**If you used chicken legs, remove the cooked chicken from the crocker and remove the meat from the bones. I broke the chicken up into about 1/2"  pieces. Return the chicken meat to the crockpot.
*Serve hot!

The flavor from the coconut milk,ginger and garlic set this soup over the edge, its creamy and to this not so continental gal, very foreign tasting! This soup is also amazing with fresh shrimp. 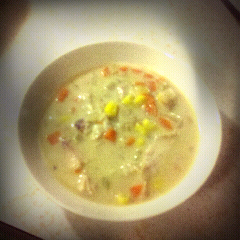 Miss Marcella Lee
Manchester, New Hampshire, United States
I am a wife and a mother of twin boys with ASD and a new baby daughter. I am a vintage fanatic, a semi-retired hair stylist, and a writer. I strive to be as perfect and imperfect as the lovely and talented Mrs. Norma Arnold. Her perfect bob and disarming glances are just the beginning...