Up And At Them!

I have neglected my dream of becoming Norma Arnold for far too long, and I am now back on the hoss. I promise!  A lot of new things have come into my life in the past year and I am really thrilled to be able to blog about most of them!

I learned how to crochet last May, which  has been such an amazing thing for me. I hate making anything time consuming so I've been doing a lot of smaller projects like hats, some bags, and this amazing space themed mobile! I followed a pattern for it because whenever I try to wing these things they end up in the Goodwill bag... ("Let Arby's deal with it!") 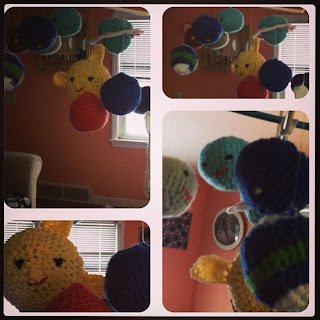 Let's see, what else... We are adopting a Cows Milk Free-Gluten Free diet in our home. It started as a way to see what effect it would have on the boys behavior, and has turned into just a goal for the entire family.  So far we are dairy free totally, and working the gluten out as we speak.  We've also been juicing (vegetables mostly, not the 'roids, I'm onlyl 1/2 Italian) and so I hope to post some boastful stuff about that coming up!

What else? Oh, I've started COUPONING! Yep, in an attempt to be completely middle aged I've just begun to dabble in the math laden world of coupons.  I don't plan on having a big stockpile, I really just want to save money on the crap that we *have* to buy.

So for now that is what is going on. I've got to rescue the toddler from atop the kitchen table now.

Miss Marcella Lee
Manchester, New Hampshire, United States
I am a wife and a mother of twin boys with ASD and a new baby daughter. I am a vintage fanatic, a semi-retired hair stylist, and a writer. I strive to be as perfect and imperfect as the lovely and talented Mrs. Norma Arnold. Her perfect bob and disarming glances are just the beginning...